Diverse experiences shape the mind-set of Sikh men when it comes to exploring their gay sexuality. Though socioeconomic status, family background, and education do help in demystifying the outlook, it’s evident that religion and symbolism associated with it play a significant role in deciding their behavior. Amandeep Khurana explores.

It was late in the night. Kawar* was satiated with his Rajma Chawal dinner. And yet, his mind was racing as he sat across his parents watching TV sipping customary tea post-dinner. Back home for the semester break, the 24-year-old, was a typical good-looking Sikh with a free-flowing beard and impeccably tied pagdi (turban). He was a good son. Good at studies, strapping and the kind of son, all parents would want to have. But tonight, Kawar was about to shatter the idle son myth. After years of an internal struggle of coming to terms with his sexuality, Kawar had decided to come clean.

The ensuing silence was deafening. After a pause that seemed like an eternity, the father summarily dismissed Kawar’s explosive assertion with ‘How can you be gay? You are Sikh.’

Kawar kind of knew that this was coming. His father had preconceived notions about being a Sikh and sexuality.

Sikhism derives its roots from principles of 'Miri' & 'Piri', the two Kripans, first laid out by the sixth Guru Shri Guru Hargobind. He stressed that human existence is an amalgamation of Miri- the materialistic component of life, highlighting authority & power for the goodwill of others, and Piri, referring to the spiritual growth of an individual. By the time of the 10th Guru, Shri Guru Gobind Singh, the Khalsa Panth was established which focused on creating a distinctive-looking warrior race, epitomizing qualities of fearlessness & bravery to combat the atrocities of Mughals. This inevitably led to a set of masculine stereotypes inbuilt in the religious framework, subconsciously burdening Sikh men with unsaid expectations of masculinity.

The Sikh scripture ‘Guru Granth Sahib’, considered as the final Guru, doesn’t explicitly mention anything about homosexuality. Though it does emphasize the importance of family life and the bond between husband and wife, many scholars interpret it as the devotion between Guru and disciple.

In the contemporary world, Sikhism in general and Sikh men, in particular, has acquired a clichéd image in many ways. Fuelled by the quintessential Punjabi dance numbers played at every party, big fat Punjabi weddings in Bollywood potboilers, & the ‘car-o-bar’ culture of Delhi & Chandigarh, Sikh men are perceived to be boisterous with a carefree attitude and machismo accompanied by the compulsory beard and ‘pagdi’ that’s only accentuated by the ‘Built’ (Bullet bike)  & ‘gehri’ zeitgeist.

Being Gay/Bisexual and being a Sikh can be jarring for those who think that the marital race known for its valor can also produce men who have sexual relations with other men, especially as the receptive partner. The very thought would revolt a huge section of the Sikh society which has the strong set notion of how a Sikh should look and act!

'Coming Out Is Unimaginable'

Growing up with such “expectations” of the society, 40-year Simarjeet*, who is a serving army jawan had never imagined that not being married or being gay was even an option. He grew up in a society where it was common to experiment with boys of the same age.

Simarjeet was a typical product of also of a prevailing belief that usually by 18-20 years of age; a boy becomes ‘sayana’ (mature). In such a society remaining single was never an option and even the most effeminate Sikh men (usually called as ‘Nee’, a pronoun for the female gender) got married to a woman eventually.

Simarjeet’s dalliances with same-sex were quite a few. Struggling with his attraction towards men since childhood, his experiences of growing up in rural Punjab was surprisingly liberal. But that was just that. Experiments! Marriage followed and then came a daughter (9) followed by a son (7)  Simarjeet claims that he ‘came into this line’ relatively late, his first experience manifesting at 29.

The concept of a typical top or bottom was farfetched in rural Punjab.  "Most of the boys in Punjab are top. Even bottoms identify as bisexual,” he says Therefore, the idea of coming out as gay, sharing real pictures on dating apps, and men living together as a couple was unimaginable.

The importance of beard and turbans

It is not difficult to imagine why Simarjeet thinks so. It is ingrained in the young Sikh boy's psyche that his beard and turban are the equivalents of male dominance even sexually and that it makes him the man by default dominant partner in bed.

Angad*, 30, also believes that he is one such man. Repulsed by the notion of someone referring to him as gay, this 6 feet muscled Punjabi Jatt with a handsome trimmed beard and neatly cropped hair grew up in Haryana.

Being openly gay was a farfetched, unheard of concept for him. Why even cropping of the customary long hair was sacrilege. He recalls how furious his family was when he came home one day from school after having chopped his hair. In a fit of rage, his father beat him black and blue and threw him out of the house. Eventually, the dust settled and he was back in the house but not before realizing that for the older generation, the idea of Sikhism was still inextricably linked to keeping full-length hair.

Visibly overflowing with testosterone, his bravado falls flat when he admits that back home he can’t keep his real picture on display on the dating apps, lest someone remotely gets a hint. "Maar Dalenge Ghar wale (My family will kill me)," he shudders.

And yet his urge to make out with the same-sex and earn some money as well takes him every few days to Mumbai and Delhi where he works as a part-time escort. His clients love him.

Why wouldn’t they?   He is after all a typical tall Sardaar, beefy and hung and a pure top. For him, being the clichéd macho Punjabi has helped him rake in more money and also have his sexual urges fulfilled  Never mind that he belongs to the landed gentry’ class.

Though he has met several gay couples in bigger cities, the difference in urban and rural areas couldn’t be starker. He recollects the saga of a boy from his neighborhood who mustered the courage to come out to his family in face of relentless pressure for marriage. The boy’s mother's first reaction was ‘teri to itni mooch daadi hai, tu kaise hijra ho Sakta hai?’ (You have a proper beard and mustache and beard, how can you be a transgender?). The boy was hounded by the family, evicted from the property, and became a laughing stock in the village.

Naturally, Angad plans on getting married next year to one of the many girlfriends he has back home.

Things are better though in cities. Param* was born and raised in Mumbai.  A smart, suave, and well-groomed Sikh man, glamour and a yearn for traveling made him choose aviation as his professional calling. Never really comfortable with long hair and beard, this soft-spoken man was always bombarded with questions like ‘Why don’t you drink whiskey? No Sardaar drinks wine’, or ‘why are you petite and thin like girls, don’t you folks eat ghee and makkhan all the time?’

Though his parents were deeply religious, they didn’t create a scene when he came out to them at 22. With time they accepted and understood that child was different from others and probably that’s why he says that his relationship with his mother became much stronger after the revelation. Her only concern now is that who’ll take care of Param after she dies.

Param was constantly rejected on dating apps.  Most of the guys he liked either blocked or responded back apologizing saying they were not into Sikh men. Then there were guys who approached him consistently as they saw in him a dominating top corroborating with a masculine appearance. Caught between this frustration and lowering self-esteem, he decided to cut his hair. The decision, though not acceptable to his parents changed his life. Walking on the streets, guys began to notice him, even double-backed at times.  Distant relatives used to shower him with compliments about his new hairstyle albeit in a low voice. He felt exhilarated and finally at ease with himself.

‘My current boyfriend openly admits that had I met him in my Sikh avatar, he wouldn’t have gone out with me’ he jokes.

Gurpreet's* father passed away when he was 10. Now, 22 years later he can’t thank enough for his mother’s invaluable role in bringing him up and his siblings through hardships in a city like Delhi. He completed his engineering and was employed at a plum government post. Far away from the clamor of kinship and joint families, his family’s reaction to him coming was more measured and subtle.

After taking him to a few psychiatrists for ‘treatment’, his mother eventually accepted her son’s sexuality. ‘She still has her episodic exacerbations especially when I mention that I am going to a gay party’ he chuckles. Though he did flirt with the idea of chopping his hair, eventually he made peace with it and doesn’t bother him anymore. Owing to his well-built and hirsute physique, irrespective of his preference, men invariably take him to be a commanding partner in bed and it irritates him occasionally.

‘Things could have been simpler for us but then most other religions come with some baggage.  Being a religious Sikh and out and proud gay need not be mutually exclusive  I am an example’ he smiles. Amen. 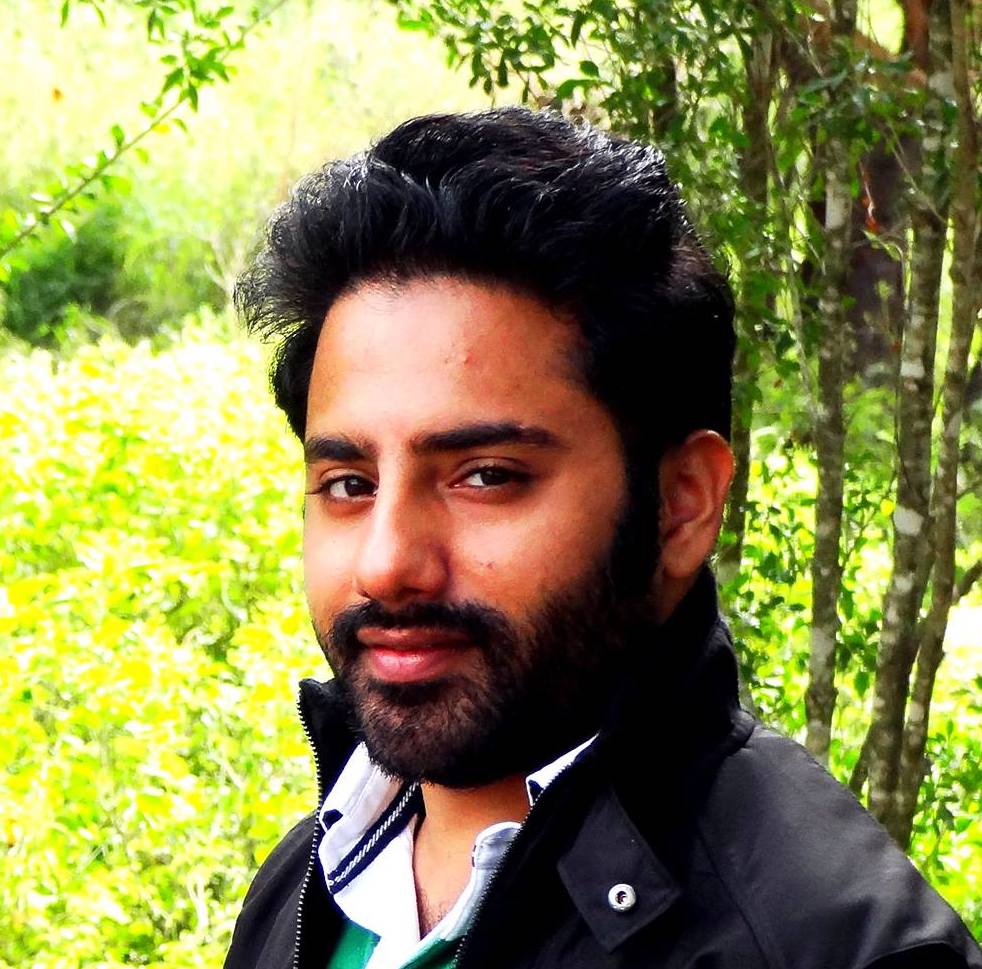